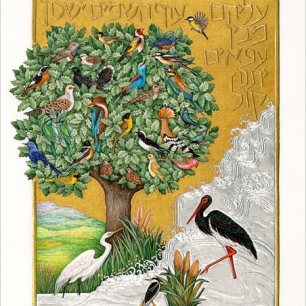 Barbara Wolff, Among the Branches They Sing from You Renew the Face of the Earth: Psalm 104. The Morgan Library & Museum, 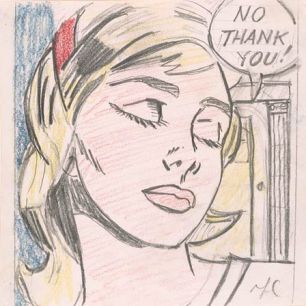 What I love about visiting The Morgan Library & Museum are their diverse exhibits and the inviting space within which to experience them. Two newly opened exhibits drew me there recently. 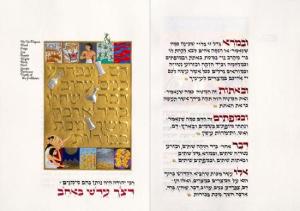 The first was “Hebrew Illumination for Our Time: The Art of Barbara Wolff,” (on view until May 3). Wolff is a contemporary artist who uses the techniques of medieval manuscript illumination. She paints on animal skin, and highlights her illustrations with silver, gold, and platinum foils.  The  manuscript, the traditional book that accompanies the Passover Seder, was originally commissioned for use by the Rose family.  The Hebrew text was written by Izzy Pludwinski , and the English captions are by Karen Gorst. 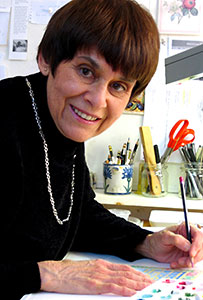 In addition to having each page of the Haggadah on view, there is a fascinating film that accompanies the exhibit. An Illuminated Haggadah for the 21st Century  documents the process and craft involved in creating the Rose Haggadah. Wolf describes everything from what kind of animal skin she selects and why; her formula for creating gesso (the binder applied as a basis for the gold leaf); and the ancient art that inspires her illustrations.

The exhibit also showcases ten folios of “You Renew the Face of the Earth”  which Wolff created to illustrate passages from Hebrew Psalm 104, a celebration of all creation.

For a completely different kind of art, also go see Embracing Modernism: Ten Years of Drawings Acquisitions. There are over eighty drawings from 1900-2013, acquired by the Morgan over the past decade. They include an exciting group of artists from Matisse, Mondrian and Schiele to Pollack, Warhol and Lichentstein.  Curator Isabelle Dervaux has organized the drawings “by the characteristics that define its modernity in relation to the historical tradition. ”  The themes are: The Autonomy of the Line; Gesture and Trace; High and Low; Everyday Objects; and From Melancholia to Schizophrenia. This exhibit is on view until May 24th. 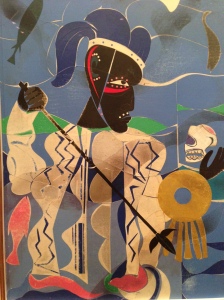 Romare Beardon, “Poseiden. The Sea God-Enemy of Odysseus” (1977); collage of various papers, with foil, paint, ink and graphite on fiberboard

“Romare Bearden: A Black Odyssey” is an exciting new exhibit on view at the Wallach Art Gallery at Columbia University. Based on Homer’s poem, Bearden created a series of collages and watercolors that bring to life Odysseus’s battles, triumphs, temptations and sacrifices that he experienced in his 10-year journey home to Ithaca. 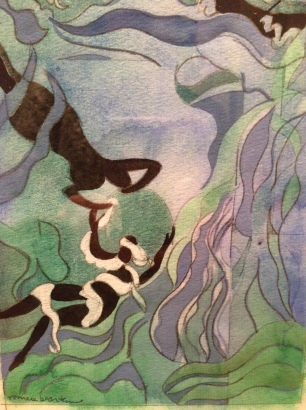 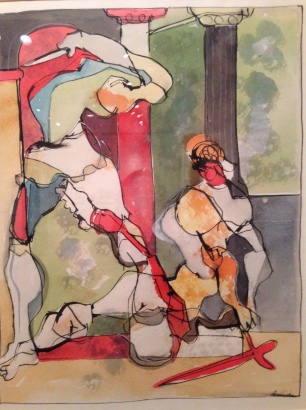 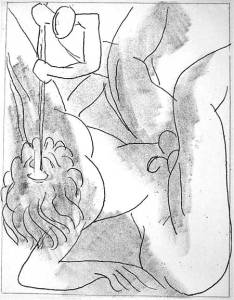 Also on view at the exhibit is a 1935 special edition of James Joyce’s Ulysses from Columbia’s Rare Book and Manuscript Library. The book contains reproductions of 20 preliminary drawings and six etchings by Henri Matisse, who based his illustrations on six episodes in Homer’s Odyssey. This was particularly interesting to see following on the heels of the MoMA “Matisse Cutouts” exhibit which closed recently. Watching Bearden create his collages in a film available at the exhibit is reminiscent of a similar film shown at the “Cutouts” exhibition; both artists drawing with scissors.

The Wallach Art Gallery is just one location at Columbia University to see art work. It’s also worth visiting Columbia University for  the wide range of sculptures situated throughout the Morningside campus, including works by Auguste Rodin, Daniel Chester French, and Henry Moore. The outdoor sculptures are part of approximately 10,000 works of art, overseen by Columbia’s Art Properties department. Donated to the University over the past two centuries, the art can be found in public spaces and also held in storage. They include:

Roberto C. Ferrari, an art historian and librarian, was hired in 2013 as curator of Art Properties. He and his team are developing an online inventory and exploring social media options to make more of the collection digitally accessible not only to the Columbia community, but to art lovers worldwide.

For now, be sure to visit the “Romare Bearden: A Black Odyssey” which will be on view through March 14th. Then, when the weather warms up, stroll through the campus to see the collection of outdoor sculptures. 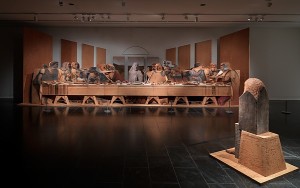 Though I’m at the Metropolitan Museum of Art every week, I somehow missed seeing an incredible sculptural installation by the artist, Marisol.  She is best known for her large figural sculptures, which address a variety of subjects. The piece at the Met is entitled, “Self Portrait Looking at the Last Supper,” and is based on Leonardo Da Vinci’s painting of the same name. At 30-feet long, it is the same length as Da Vinci’s fresco.

Seated across the room from The Last Supper, there is a single wooden figure representing the artist herself . Her presence is meant to underscore that art is about looking, evaluating, and reinventing what one sees, according to the exhibition notes.

You can find “Self Portrait Looking at the Last Supper” all on it’s own in gallery 909 in the first floor Modern and Contemporary Paintings section. Exhibiting it this way allows the viewer to really appreciate the details of the construction and feel the impact of the piece.

“Self Portrait Looking at the Last Supper” was supposed to close several weeks ago but will be on view at least through March. It’s worth a visit to the Met just to see it but certainly stop by if you’re at the Met for other reasons.