Jacob Lawrence, War Series: Another Patrol (1946), Tempera on composition board)

Jacob Lawrence, War Series: The Letter (1946) Tempera on composition board

There are many reasons to visit the new Whitney Museum including enjoying the art in the spacious and inviting galleries; the Renzo Piano architecture; and the views from the 7th and 8th floor terraces.  But what I was not expecting was to see Jacob Lawrence’s War Series.  Lawrence (1917-2000) was an Africa-American painter known for his depiction of African-American life. He’s best known for his narrative collections that he painted in story format using blacks and browns juxtaposed with vivid colors.

Lawrence served in the United States Coast Guard during World War II.  The fourteen panel War Series describes his first-hand  “sense of regimentation, community, and displacement” that he experienced during his service.  The “story” alternates between vertical and horizontal formats, literal and abstract depictions; and individuals and groups. The series supports Lawrence’s belief that one cannot “tell a story in a single painting.” 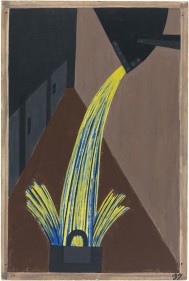 I’m not sure I would have examined these as closely had I not experienced Lawrence’s equally compelling Migration Series on view at  the MoMA. Created in 1941, The Migration Series tells the story of the Great Migration, the multi-decade mass movement of African Americans from the rural South to the urban North that started around 1915. The series is comprised of 60 small tempera paintings with text captions that read like a children’s story book. The color palettes in the two series are very similar, but the text in the Migration Series is much more evocative. It’s the first time all 60 panels have been shown together.

The Migration Series is only on view until September 7th while The War Series is, for now, in one of the Whitney’s permanent galleries.

Paintings by Vincent Van Gogh were the first works of art to really have an impact on me. I loved his use of color and the feeling of constant movement that his lines evoked. This summer there was an opportunity to delve deeper into Van Gogh’s work with two shows — one very small and one large, both closing soon. The first is Irises and Roses at the Metropolitan Museum of Art (closes August 16). Painted on the eve of his departure from the asylum at Saint-Rémy, the group includes two paintings — an Irises and a Roses — from the Metropolitan Museum’s permanent collection, and one each from the National Gallery of Art in DC and the Van Gogh Museum in Amsterdam. The exhibition reunites the four paintings for the first time since the artist’s death.  It opened 125 years to the week that Van Gogh announced to his brother Theo, on May 11 and 13, 1890, that he was working on these “large bouquets,” according to the Met. The paintings are beautiful but they no longer carry the original colors that Van Gogh selected when painting them. To learn more about this, and other details behind the paintings, you must watch the terrific videos on the wall opposite the paintings. 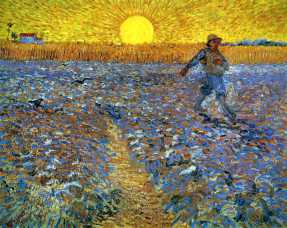 A much larger Van Gogh exhibit can be seen at the Clark Art Institute in Williamstown.  Van Gogh and Nature (on view through September 13) contains fifty works including iconic paintings such as A Wheatfield, with Cypresses (1889, National Gallery, London), The Olive Trees (1889, The Museum of Modern Art, New York), and The Sower (1888, Kröller-Müller Museum, Otterlo). As the Clark describes it, the exhibition focuses on Van Gogh  as a “thoughtful and meticulous student of nature who found solace and personal fulfillment in studying and enjoying the natural world.” What I found surprising about some of these paintings was the use of  a different color palette than one expects with Van Gogh’s works.

Vincent Van Gogh, Roadway with Underpass, oil on cardboard, 1887 (at the Guggenheim)

If you’re a Van Gogh lover like me, you can also see 15 additional works by Van Gogh in the permanent collection at the Met. Additionally, the Moma and the Guggenheim also have a few Van Goghs on view.

As you walk through the Frick Collection’s Garden Court, towards the Oval Room, you immediately see in the distance, the bright orange color of Frederic Leighton’s stunning “Flaming June.” The closer you get, the more striking it becomes. Not only because of the intrinsic qualities of the painting itself  — the color, the lines, the abandonment — but also because it is unlike anything else at the Frick. 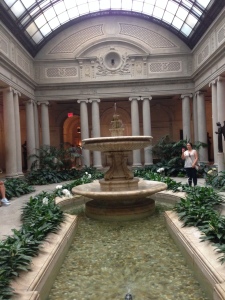 Garden Court at The Frick Collection

Built in 1913, the house was designed to accommodate paintings and other art objects collected by Henry Clay Frick, the Pittsburgh coke and steel industrialist.  The intention was to one day leave the house, and Frick’s art collection, to the public. After Mrs. Frick’s death in 1931, family and trustees of The Frick Collection began the transformation of the Fifth Avenue residence into a museum. Additions were made to the original house, including two galleries (the Oval Room and East Gallery), a combination lecture hall and music room, and the enclosed Garden Court, originally the location of the home’s driveway. It opened to the pubic in December 1935.

The permanent collection began with one hundred thirty-seven paintings and also included sculpture, decorative arts, drawings, and prints. Today, The Frick houses a permanent collection of more than 1,100 works of art from the Renaissance to the late nineteenth century. Artists represented in the Collection include Rembrandt, El Greco,Vermeer, Gainsborough, Turner, and Whistler. While the later acquisitions are able to be loaned to other museums, Frick stipulated that his original collection could only be viewed in his original home. My favorite room was the West Gallery where there are several JMW Turner harbor paintings and iconic Vermeers and Rembrandts.

Leighton’s Flaming June is on view through September 6th. The Frick is open everyday but Monday.