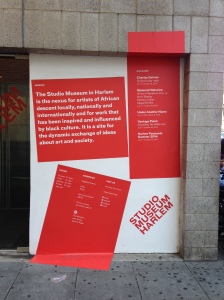 If you weren’t looking for it you would probably pass it by. But the Studio Museum in Harlem is worth seeking out. Founded in 1968 and located on west 125th street, The Studio Museum showcases work from artists of “African descent locally, nationally and internationally,” as well as work that has been inspired and influenced by black culture. The museum’s permanent collection  “represents more than 400 artists, spans 200 years of history and includes over 1,700 works of art, including paintings, drawings, sculptures, watercolors, photographs, videos and mixed-media installations. ” 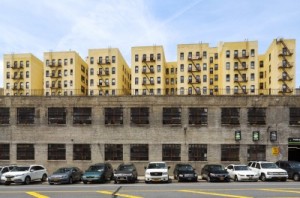 Art work from the ongoing “Harlem Postcards” Project is the first thing you’ll see, even before entering the galleries. The Project invites contemporary artists of varied backgrounds to capture the diversity and vitality of Harlem, culturally or politically Each photograph is reproduced as a limited edition postcard and available free to visitors.

What I really love about the museum is that the gallery space is bright and broad, and the art work is very accessible.  And though the museum is small, there is usually 1 large exhibit and 1-2 smaller exhibits on view. Recently opened is  “Charles Gaines: Gridwork 1974-1989. Gaines is a Los Angeles based conceptual artist and is celebrated  for his photographs, drawings and works on paper that “investigate systems, cognition and language.” I was particularly taken by the “Numbers and Trees” series; both the individual paintings and the collection viewed as as whole. What I learned at the exhibit was that Gaines often began these works with an arbitrarily selected arithmetic formula. He then used the formula to generate shapes plotted on a grid. As you view each painting you can see how these grids progressed.

“Material Histories: Artists In Residence 2013-14″ is another special exhibit featuring the works of three young artists, Kevin Beasley, Bethany Collins and Abigail DeVille. They were all awarded an eleven-month residency at the Studio Museum as part of the Museum’s commitment to support emerging artists. I really liked the work of Ms. Collins. ArtsATL.com describes Collins as “a conceptual artist who makes alluring paintings. She parses, decodes and deconstructs language and then deploys sentences, words and letters as visual vocabulary.” In one piece, Collins taped pages of the 1993 edition of Southern Review to the wall and blacked out the text, creating rectangular blocks. Up close you can see what was blackened, but from afar the pieces work together to create an engaging abstract visual.

Both these exhibits will be on view until October 26.