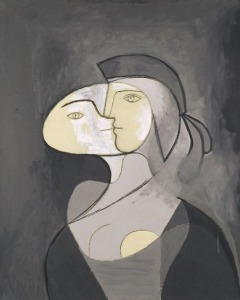 These aren’t my favorites, but the paintings in Picasso’s Picassos offer a unique glimpse into Picasso’s personal life. On view at the Gagosian Gallery on the Upper Eastside, the exhibit features works from the collection of Maya Ruiz-Picasso,and organized by Diana Widmaier Picasso. 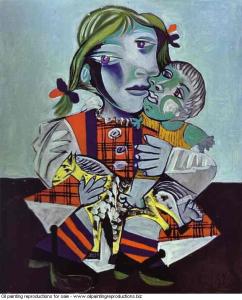 Maya Ruiz-Picasso is the daughter of Pablo Picasso and Marie-Thérèse Walter. Her personal collection is the part of the legacy Picasso left when he died in 1973. The work on view at the gallery is drawn from the period between 1931 and 1971, and includes several portraits of Marie-Thérèse Walter and a well-known portrait of Maya as a child.

The exhibition was initially going to close at the end of January but has been extended to February 18th. 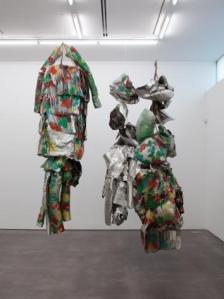 If you go, be sure to also visit Marisa Merz: The Sky is a Great Space on view at the Met Breuer, across the street. The exhibition is the first major retrospective in the United States of works by this Italian painter, sculptor, and installation artist, the sole female protagonist of the Arte Povera movement. 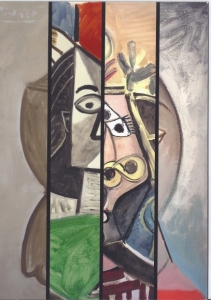 I just returned from Barcelona where, among many art museums, I visited The Museu Picasso.  Its focus is on Picasso’s formative years and is home to  4,251 works that make up their permanent collection. The museum also has special exhibitions. I saw a wonderful one looking at the relationship between Picasso and Salvador Dali.

When I returned, I was delighted to learn that David Benrimon Fine Art LLC had a Picasso exhibition highlighting and celebrating some of the women who  inspired Picasso’s life’s work. While Picasso had relationships with many women, there were eight, according to the gallery, who had a critical influence on his work: Fernande Olivier, Eva Gouel, Gaby Lespinasse, Olga Khokhlova, Marie- Thérèse, Dora Maar, Françoise Gilot and Jacqueline Roque.  Picasso: Femmes includes portraits such as the 1936 painting of Marie-Thérèse, as a young adolescent. There are three different portrayals of Jacqueline; his muse and second wife for the last nineteen years of his life. 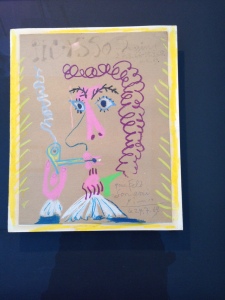 There are also several works on paper and a number of portraits Picasso did using “aquatint,”a process of etching tonal values, which can create a look like ink or watercolor washes. One amusing piece was not within the “femmes” theme but part of a series of portraits Picasso did of smokers. This crayon and felt tip pen portrait looked like something a school child would draw. Nonetheless, it had a distinct Picasso feel to it. If you’re a Picasso fan then this is a show worth visiting. It will be on view through June 30th at the gallery in the Crown Building (730 Fifth). 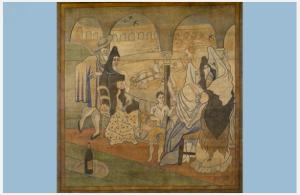 You might also want to stop by the New York Historical Society to see the newly acquired, and conserved, stage curtain, “Le Tricorne.”   For more than half a century it has hung in the hallway of the Four Seasons Restaurant, in the landmarked Seagram Building. Picasso painted the curtain for the two-act ballet The Three-Cornered Hat (El sombrero de tres picos or Le tricorne). The ballet and curtain were commissioned by Sergei Diaghilev for his Paris-based Ballets Russes. It opens May 29th and wil be on permanent view at NYHS.