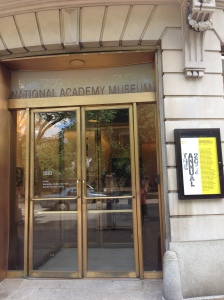 Located on Fifth Avenue, to the north of the Guggenheim and south of the Cooper Hewitt Museum, The National Academy (founded in 1825) is an association of artists and architects; a school; and surprisingly for many people, a museum.

Each year the Academy Museum has an exhibit to promote the works of  a selection of their Academicians (over 300 prominent artists and architects). This year’s exhibit – Redefining Tradition – brings together multiple generations of National Academicians and “creates a constellation that illuminates affinities, connections, differences, and most importantly a relevant continuum of American art and architecture, ” according to the Academy. The exhibit includes paintings, drawings, sculpture, and architectural design from more than 60 artists and architects including Richard Serra and Carrie Mae Weems.  As a visitor, I really enjoyed the open  spaces of the exhibit areas, and the opportunity to get to know artists I was unfamiliar with, like Margaret Grimes, Barbara Grossman, and Charles Wells.

From the exhibit: Visualizing Time, Prints from the NA Museum 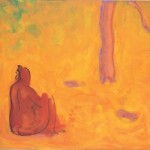 From the exhibit: See It Loud, Seven Post-War American Painters 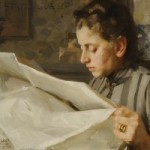 Over the year, The Academy Museum offers an eclectic selection of exhibitions. Among those on view this year was a retrospective of paintings by Swedish artist, Anders Zorn (1860-1920); “See It Loud,” seven post-war American painters whose art “grew out of abstract currents, but shifted toward representation;” and an exhibit showcasing prints from the Museum’s collection.

Redefining Traditions will be on view until September 14, 2014.