Built in 1921, The Crown Building at 730 Fifth Avenue was originally called the Hecksher Building after its developer August Hecksher, a German immigrant who made his wealth from mining operations. Famous for its golden top, the Art Deco tower was once owned by Ferdinand and Imelda Marcos. Today, it’s back on the market for an estimated $1.5-2 billion dollars. Well-known tenants in the building include jewelers Bulgari and Mikimoto; the Spitzer family, headed by former Gov. Eliot Spitzer; talent and literary agency ICM; private-equity giants KKR and Apollo Global Management; and men’s designer Ermenegildo Zegna.

I think what makes this building interesting is the number of art galleries one can find throughout its floors. In some ways this isn’t surprising because it’s in this building that the Museum of Modern Art got its start in 1929. 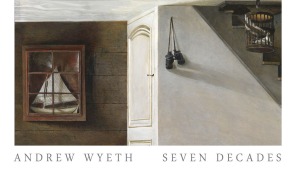 I was drawn to the Wyeth show after seeing Andrew Wyeth: Looking Out, Looking In, which recently closed, at the National Gallery of Art in DC. While the NGA exhibition focused on Wyeth’s window executions, primarily in watercolor and pencil; the ones here represent a range of subject matter for which Wyeth became internationally known: the male and female figure, landscape in all weather conditions, local architecture, and the flora and fauna that inhabited his two favorite places: Chadds Ford, Pennsylvania and the coast of Maine. I enjoyed the DC exhibit more for Wyeth’s ability to catch hauntingly beautiful moments in time. But the Adelson exhibit provided a compelling counterpoint. The show will be there until December 20th.

Still Lifes: Reflections of American Culture uses still life painting to demonstrate “the evolution of modernism in America after the 1913 Armory Show,” according to the gallery. Significantly, it was through the 1913 Armory Show that many American painters were first exposed to Cubism, and you can see that influence in many of the paintings on display. I was familiar with some of the artists, like  Max Weber, but there were many others whose work I had not seen before. The paintings are organized thematically — fruit, flowers, abstract objects —  and underscore how simple things can be so widely interpreted. There’s a wonderful essay about the exhibition on the gallery’s website, and available at the show, which is on view until January 31st.

Other galleries worth visiting in the Crown Building are: The Benrimon Gallery (7th floor) which has an exhibition of works by Roy Lichtenstein; the Forum Gallery (2nd floor) which has a new exhibit opening December 12th of watercolors by David Levine; and the Nohra Haime gallery (7th floor) showing works by Julie Hedrick that are focused on “Alchemy,” and it’s relation to gold.

Check at the lobby desk for a complete list of the galleries found in the building and uncover your own New York art find.